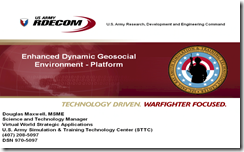 3D Web is the set of technologies that put user browsers in an online, interactive 3D environment.

The “killer variable” in successful combat is communication and coordination.

It’s heartwarming, on several counts, to know that the US military is fully on board researching “use cases” for 3D Web digital virtual environments.

In November, 2009 I reported on Douglas Maxwell (SL: Maccus McCullough’s) management of 3D Web for the US Navy, particularly the Naval Undersea Warfare Center Campus in Second Life. Now, a year later, Maxwell is doing the same for the US Army, with even more applications, technologies, and learnings.

For the Navy, the key use cases were public exhibitions (e.g., a walk-through nuclear submarine in SL), campus recruiting (e.g., ability to call in NUWC experts worldwide to talk as Avatars with prospects at college recruiting fairs), training (e.g., range firing), design testing (e.g., control room digital mockups), and military family support (e.g., chat areas for soldiers and loved ones to communicate back home). For testing and proving these applications, a combination of Second Life, Second Life Enterprise Beta, OpenSim, and Teleplace/Quak sufficed.

Army use cases focus on fast, effective response to terrorist threat and attack. This requires simulation of “force on force” engagements of up to thousands of participants. At this scale, the “killer variable” in successful real world combat is communication and coordination, which allows smaller US military forces to cope with larger insurgent forces. 3D Web allows multiple training scenarios to be run at a fraction of the cost of equivalent physical simulations. Although physical simulations are still necessary, they cannot be run as often as needed, nor changed as easily as 3D Web simulations. 3D Web becomes a significant training enabler as real world challenges become more complex.

Maxwell’s project is called EDGE-P, for Enhanced Dynamic Geosocial Environment – Platform. Already, his test platforms can support up to 700 simultaneous avatars for real-time simulation and training. How can he host 700 at once? Maxwell uses a blend of 3D Web experts and technologies. One expert is Chris Collins, former Linden Lab employee (SL: Logan Linden) and now CEO of 3D Web company, Tipodean. Collins is seriously expanding the power of OpenSim.

One of Maxwell’s Key 3D Web Lessons is that you must blend 3D Web technologies to get workable, practical solutions. No one product does it all. With the cancellation of SL Enterprise by Linden Lab, Maxwell has had to move on to other options for actual military use. He’s got the coolest computer lab on the planet, having bought and installed a complete 3D Web game engine, with rights to the source code and modifications, to build prototypes for EDGE-P testing and review.

TRAINING SCENARIO: Detonation of a car bomb at the entrance to an army base. Army base is located in a major metropolitan US city. There are military and civilian casualties. First responders are a combination of military and local.
3D WEB SIMULATION ENVIRONMENT REQUIREMENTS:
. Tactical Operations Centers (where the highest level decision makers are working)
. Urban Environment (where the attack and response scenario is taking place)
. Vehicles
. Non-Player AI’s to mill about and be Civilians
. Explosion and Reactive Physics
. Real World Communications Replication – not just IM or chat, but the kinds of radios and different frequencies used

The focus of the training virtual world is to be operationally accurate, with acceptable performance. In these scenarios, being able to modify source code has allowed Maxwell to add computational steering – meaning, trainers can inject scripted changes to the simulation rather than run and repeat. Normal video games and virtual worlds aren’t accurate enough to be useful. But Maxwell has replaced video game physics with professional grade, vetted physics models for ballistics and terrain. This means, for example, that vehicles can’t move faster than they should in certain weather, and that people have actual damage calculations rather than simple hit points.

Maxwell reports that the intensity of calculations required for this level of realism and interaction CAN be done real-time with currently available hardware and software. He uses a supercomputer server farm combined with regular laptops for individual soldiers, commanders, and observers. He targets to use Off The Shelf technology in his projects (although US military shelf items are not necessarily public shelf items).

A particular challenge is accurate Artificial Intelligence behavior for roles such as bystanders or opposition forces. Training activities don’t necessarily require 1,000 soldiers on stand by. A small team exercise of live soldiers dealing with a realistic training scenario and computer players can be quite effective, if the virtual environment is right. And that’s Maxwell’s job.

Technologies of interest for 3D Web training include virtual world, massively multiplayer online, and first person shooter. Also included in the recipe are HTML5, WebGL, and social media technology. There is already a diversity of existing Army simulation and gaming efforts, including America’s Army, VBS2, and Forterra’s (SAIC) OLIVE. Maxwell sees technology moving to allow for unity – instead of one tool trying to do everything, a suite of tools unite to provide an environment that can support high level decision making in a dynamic environment. A conglomeration of feeder technologies create a unified 3D Web training environment.

Maxwell sees virtual worlds becoming more ubiquitous and accepted by leaders as a valid way of doing business. The adoption pattern is similar to that for net technology, which began in the 60’s, and for web technology, which began in the 90s, that, together, have become part of everyday global life today. Second Life will probably continue to be used as a generic 3D Web demonstration platform and as a platform for public exhibition and communication. But military use of SL will shrink relative to use of open simulator and related technologies.

So: national defense is not only physical, it’s digital. I hope to hear further from Cyber Warrior Douglas Maxwell next year.

notes:
. In technical language, a “killer” variable has a critical influence on the overall behavior of a system.